Do I still love a good board game? Ahhh, yeah? DnD with some dice is still some of the best times you can have!
(personally the DM role being the coolest experience) Board games come in many shapes and sizes now, with some even have electronic components. We won’t be strict obviously because of this on what is considered a “board game” and what
is an “electronic game” such as Catch Phrase, but clumping them all into this grouping! These are some of our favorites and why we think they are a blast! 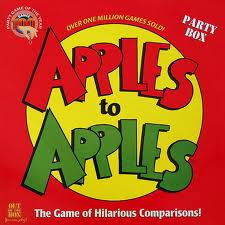 Apples to Apples can get pretty funny! Here's how to play: every player gets 7 red cards. Whoever is the judge first lays down a green card. Everyone else has to look at their 7 red cards and picks one of their red cards that best decribes the green card played. The judge then looks at the cards and decides which one was the best. Whoever layed that red card gets to keep the green card and whoever has the most green cards in the end wins. You really have to know the mind of the judge- is he goofy, literal, off the wall? If you can figure that out you will most likely win a lot of cards! Supple flight attendants anyone? 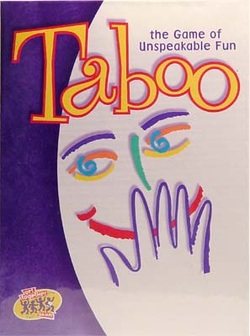 Taboo is a great game if you know your team well! Growing up, if my sisters and I were on the same team we knew each other so well that it was easy to relate the cards in a way they would understand! How to play: Divide into teams. One player from the team gets a card that has a word you have to get your team to guess. However there is a list of words you can't use in describing it! There is a timer and you try to go through as many cards as you can. If you say one of the words on the banned list then you lose a point and you get one point for each card you got right. It's a lot of fun but can be a little stressful! Also, you can't use any hand gestures, which can be difficult for some people...hehehe! 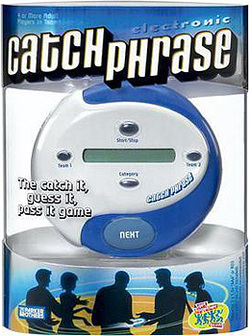 This game is kind of similar to Taboo. The game is played in two teams. The goal for each player is to get their team to say the word or word phrase displayed in the disc. One member of a team starts the timer and tries to get his or her team to guess the displayed word or phrase. A clue-giver can make any physical gesture and give almost any verbal clue, but may not say a word that rhymes with any of the words, give the first letter of a word, say the number of syllables, or say part of any word in the clue (e.g., "worry" for "worry wart"). When the team guesses correctly, the other team takes its turn. Play continues until the timer runs out. The team not holding the disc when time runs out scores a point. They also have one chance to guess the word or phrase, with team members allowed to confer; a correct answer earns a bonus point. The first team to score 7 points wins.

Fun times, I remember playing it at Micah's cabin :) 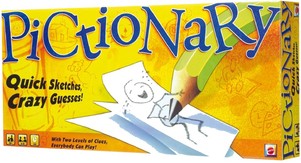 Another classic, Pictionary is a game where basically you have to draw something while your team tries to guess what it is. How to play:the team chooses one person to begin drawing; this position rotates with each word. The drawer chooses a card out of a deck of special Pictionary cards and tries to draw pictures which suggest the word printed on the card. The pictures cannot contain any numbers or letters, nor can the drawer use verbal clues about the subject he/she is drawing. The teammates try to guess the word the drawing is intended to represent. Each team makes its way around the board, trying to be the first one to reach the end! 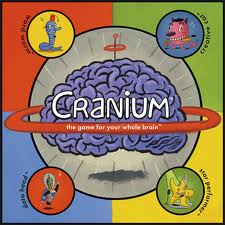 Cranium is like a "one in all" game. The teams make their way around the board, landing on different coloured squares. Each colour represents a different category of activity the team has to do and answer correctly in order to more forward. Some of the categories include drawing games like Pictionary, acting games like Charages, word games and fact/knowledge games. Pretty fun as the variety makes it a little more exciting! 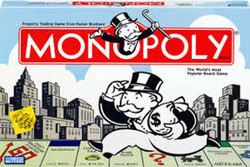 Monopoly is a classic game that involves buying properties and adding houses or hotels to make the property more valuable. The more valuable it is, the more money a player has to give you if they land on spot! Pretty fun game with its memorable community chest, free parking and jail components! And how can you not like the little moveable pieces (thimble, iron, Scottie dog...)? :) 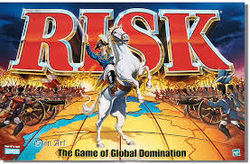 Warfare and global domination! Players are given tons of little army units to place onto the map of the world. When it's your turn, you use your units to attack other players' positions, hopefully with superior numbers. Combat is a simple dice rolling affair that stresses attrition, and reinforcements are given to players who collect sets of cards.

The Game of Life 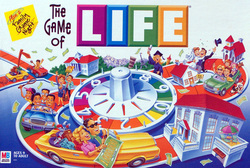 "Life" was a game we played a lot of at the cabin! The game simulates a person's travels through his or her life, from college to retirement, with jobs, marriage, and possible children along the way. It was always so fun to see what job you got and which house you ended up living in!

The classic detective game! In Clue, players move from room to room in a mansion to solve the mystery of: who done it, with what, and where? Players are dealt character, weapon, and location cards after the top card from each card type is secretly placed in the confidential file in the middle of the board. Players must move to a room and then make an accusation against a character saying they did it in that room with a specific weapon. The player to the left must show one of any cards accused to the accuser if in that player's hand. Through deductive reasoning each player must figure out which character, weapon, and location are in the secret file. To do this, each player must uncover what cards are in other players hands by making more and more accusations. Once a player knows what cards the other players are holding they will know what cards are in the secret file. A great game for those who enjoy reasoning and thinking things out. 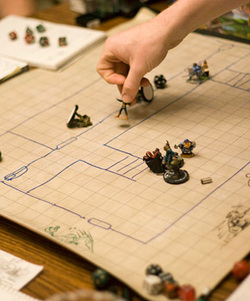 Micah is a big fan of this table top role playing game! Players create their own characters and then embark upon imaginary adventures within a fantasy setting. A Dungeon Master serves as the game's referee and storyteller, while also maintaining the setting in which the adventures occur and playing the role of the inhabitants. The characters form a party that interacts with the setting's inhabitants (and each other). Together they solve dilemmas, engage in battles and gather treasure and knowledge. In the process the characters earn experience points to become increasingly powerful over a series of sessions. You really have to use your imagination for this one!

Another cabin classic! Crokinole is like a table-top size version of shuffle board or curling. Players take turns shooting discs across the circular playing surface, trying to have their discs land in the higher-scoring regions of the board, while also attempting to knock away opposing discs. Super fun but leaves your flicking finger a little sore!
© Ashley and Micah English and The II, 2019. Unauthorized use and/or duplication of this material without express and written permission from this site’s author and/or owner is strictly prohibited. Excerpts and links may be used, provided that full and clear credit is given to Ssenkrad_II and The II with appropriate and specific direction to the original content.