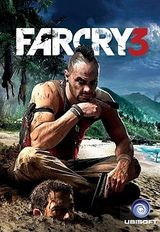 I found a guy on youtube who calls himself “angry joe” and found myself agreeing with a lot of what he had to say about a lot of different video games. With that in mind I checked out his “games of the year” and found this game on the list as well as XCOM: Enemy Unknown, so I figured I would give both of these games a try (since my Gears of War: Judgment turned out to be a totally huge pile of EA &%$!^) and I have to say, Farcry 3 is a terrible game. It takes everything that isn’t good about the Assassins Creeds while taking none of the great things the game series did have (before AC3 that is…), and tries make a “Skyrim with guns”. But it instead delivers a poor FPS with no real RPG elements:

1. You can only really make one game changing decision in the entire game, and it is at the very end of the game so you can simply save and choose one ending and then reload and watch the other 45 second ending.

2.  Loot is not randomized so you do not grind for loot; in fact you can only customize your own guns with two mods and the guns you can buy get three mods- so bottom line is you end up just using their premade guns.

3. Leveling up is a joke as it takes no real effort at all to max out your “skill trees”. Now I don’t mind a level up system where if you put hours and hours into a game you can basically fill out your skill trees with basically everything you want (Borderlands 1) and only have to worry about the few skills you do NOT want, but when you can fill EVERYTHING out with little to no extra effort- THAT is a fail.

4. No end game. Now don’t get me wrong, Fallout New Vegas and Skyrim did not have great end games as well- Oblivion and Fallout 3 taking the prize for best end game PERIOD- Farcry 3’s ending was weak and the end game was even weaker. When the game ends there is literally zero replay value as you will be doing exactly the same thing again with absolutely no difference in the outcome (or even skill tree as it is filled out)

5. Boss fights are the worst to date. Boss fights consist of randomly warping to some “other dimension” bull crap where everything else goes black and all you can see is the “boss” and literally consists of simply “push the buttons at the right time and something
awesome happens” guitar hero bull crap. You spend hours prepping a mission and go in to fight the bad guy to click B, A, X,X,B and that’s it? And the buttons you push are ALWAYS the same, so it basically results in you dying a half a dozen times while trying to memorize the exact order to push buttons? Seriously, this is so bad it hurts my brain.

6. Game breaking glitches; bad guys stuck in rocks that can easily kill you and you cannot even scratch them and you need to kill them to take over an outpost is a game breaking glitch. I don’t care if there was or is a patch to fix it; if I do not have internet and I
have bought the game I expect it to at least not have game breaking glitches, and if it does to recall the games and give you a new copy. GBG’s are a fail.

Bottom line is that this game is not worthy of even being in the top 10 of games of the year, let alone even being worth full price. I would give the overall value of this game 2 out of 5 stars due to its lack of delivering anything special while giving you game breaking glitches.

Overall Value: 2/5 stars, orunder $20 value. Would not recommend buying a copy unless it was under $20.
© Ashley and Micah English and The II, 2019. Unauthorized use and/or duplication of this material without express and written permission from this site’s author and/or owner is strictly prohibited. Excerpts and links may be used, provided that full and clear credit is given to Ssenkrad_II and The II with appropriate and specific direction to the original content.