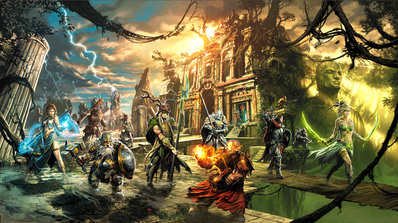 I about shat my pants when I found this- a new game in my beloved Might and Magic series! They went back to the old tile based version of the game (Might and Magic I-V) which means the game will never be as good as the VI-VIII series of the game, but what had me interested was what they could do with a tile based system and a game being sold for $20 years after the other Might and Magic’s were being sold for full price. Needless to say I was impressed. As expected the game didn’t play as well as the VI-VIII series but IMO was far superior to the I-V series and was even more enjoyable than IX (many who played the series won’t find this to be much of a surprise) The game had impressive puzzles, riddles, and tests that brought me back to the good old days of real thinking RPG’s- and all of this was done extremely well.

Let me list some concerns: The battles were done well, with my only complaint being that ranged champions really didn’t have a place in any one party due to the tile based combat system. In the 3D system you could do a “run and shoot” method vs stronger enemies that were weak in their “ranged abilities” which allowed you to pick them down and then rush in and finish them off. When you played versus ranged champions you had to try your best to miss their ranged attacks (using wizards eye) and then rush in and close the distance and beat them in close combat. This game favored hand to hand combat and left you wanting in the ranged department. Normally though this wouldn’t be a huge issue in the Might and Magic games as you could always change things up with your skill points and make things happen. The problem in this game is that they turned it into more of a “modern RPG” in that your “skill points are verrrrrry limited” (much like Skyrim did vs my favorite Oblivion) and only allowed for 4 party creation vs 5 party or 6 party. Meaning if you specked your ranger to be pure arrow damage you basically just gave yourself a major handicap as you will then have to deal all your damage with only two champions (as your third basically HAS to be a healer- Paladin pref as they are very OP in the game) and your ranger will be left twiddling her thumbs most of the time as she won’t be able to do much as you just spent all of your limited points on bow. Ambushing was also done cheaply. There were times when you grabbed a Gong in Might and Magic VI and literally 100 skeletons appeared behind you- I repeat, there were TIMES when this happened. I would also like to note that in EVERY case they gave you a way to beat the ambush- in the case with the Gong you could run behind the alter and open a secret door that took you up and over the skeletons so that you could pick some off with your bows  or run to freedom. Might and Magic X seemed to have you get ambushed ALL-THE-TIME! And you would come from a room only to have an “ambush trigger” in which three people walk out of the room you just cleared (I guess they were hiding under the bed?) RPG’s that have to make an “ambush based” battle system or a “cheating AI” system (thank you Civilization Revolution for that one) to cheaply inflate difficulty is just that- cheap.  Another complaint would be how small the world was- it didn’t take much time as far as Might and Magic’s are concerned to beat the game and clear the world, and some of the biggest “optional dungeons” are not even open if you do not have a dwarf or an orc in your party. (Would highly recommend having both in your party for that reason). Because of this “smallness” you could also find yourself wandering VERY FAST into a battle with people WAY TOO POWERFUL for you to kill because you took one too many lefts and there is NO WAY to retreat or run away (like you could in the VI-IX games) so basically you have to load. The thief’s guarding their poached animals is a perfect example of this. You have to go see this guy in this tower, but directly behind his tower is a group that will kill you easily at this point in game. You can and need to go to the RIGHT of the tower after this, and can even go to the LEFT of the tower and survive the fights, but if you go BEHIND you are dead. And in this game you are talking about a matter of like 4-10 tiles and an instant game over. In the old games you had on the world map in some cases like MILES between you and them and if you ran into someone more powerful than you that instant killed one of you people you just went “OHHHH CRAAAAAP!” and ran as fast as you could back to town- no game over. Also another note, one of the many things that made Might and Magic amazing for its time period was its ability to change things about RPG’s that people hated while keeping things IN them that people loved. One of the things in TOOOOOO MAAAAANNNY RPG’s that NO ONE LIKES, and I seriously mean NO ONE- you can ask anyone and they will all say the same thing- is LOOOOONNNGGGGG ASSSSSSSS GAAAAMMMMMEEEE OOOVVVVVVEEEERRR SCCCCRRRRREEEEEENNNNNSSSS! RETARDED! And then they kick you OUT of the game (like one final FU to the player) and then expect you to just load up again calmly and continue… SERIOULSY F THAT! Might and Magic’s DIDN’T HAVE THIS! You just lost all your gold and the grim reaper brought you back to life INSTANTLY. In Fallout 3 if you die it will INSTANTLY LOAD the last saved game that you have! Creating a needlessly long GAME OVER and kicking people OUT of the game just gives people time to be PISSED OFF at your game and LEAVE IT! Don’t ADD needless and pointless frustration to your game… Yuck! Needless to say Might and Magic X brought long Game Over’s back… Yeeaaaah

Things the game did well: This game had no budget, and is being sold cheap. With that in mind what they did with what they had, well, is amazing, simply amazing. This game is a real RPG, you create your party, you level up your party and allocate skill points and attribute points. There are people immune to certain magics and some people who are weak to others. (Check, it just beat Skyrim). It has a free-ish world exploration. It has a random item creator (much like Diablo) with unique relic type items that are really good and level up to make them better- good but not great. They could have allowed the relics to upgrade even more than just 4 levels, giving you options to upgrade items how you see fit, and given more items in the game (or just allowed multiple relics to drop and allowed you to give them stats that you wanted or giving you the choice between a couple different random upgrades each level so that multiple relics would be totally different) as the total number of items in the game felt more like that if Baldur’s Gate than that of Might and Magic games. Puzzles and riddles were awesome, love this lost aspect of RPG’s, the only problem I had with them was that every step took a “turn” and your torch light and other similar abilities lasted “per turn” and so you found yourself having to stop and cast light so they you could see often. This game had multiple playing classes and multiple playable races all with their own strengths and weaknesses. This adds to replay value and makes the game real. Love it.

Overall Value: 5/5 stars, or FULL value for those that are fans of the series. 3/5 stars, or under $30 value for everyone else
© Ashley and Micah English and The II, 2019. Unauthorized use and/or duplication of this material without express and written permission from this site’s author and/or owner is strictly prohibited. Excerpts and links may be used, provided that full and clear credit is given to Ssenkrad_II and The II with appropriate and specific direction to the original content.