Now we all know that modesty is important, so important that it actually appears in the temple recommend interview; but how many Mormons set a bad example of this and continue to hold recommends? Now we are not here to point at anybody but ourselves, we have not been living this and using weak rationalization to cover it up when the doctrine is clear. The more we dug into the subject the more we realized how much we do sporting activities without wearing the garments- activities that could clearly be done with them on. Even worse yet we wear clothing (or no clothing at all) that is more revealing than the garments in the process. One such activity that has been impressed on our mind because of how badly we are breaking the commandment is swimming. Now we are not talking about speed swimmers or Olympic divers here but rather casual on the beach or at the lake or in a hot tub swimwear. The doctrine is clear:

“Never lower your dress standards for any occasion. Doing so sends the message that you are using your body to get attention and approval and that modesty is important only when it is convenient. Immodest clothing includes short shorts and skirts, tight clothing, shirts that do not cover the stomach, and other revealing attire. Young women should wear clothing that ﻿covers the shoulder and avoid clothing that is low-cut in the front or the back or revealing in any other manner﻿."
-For the Strength of Youth 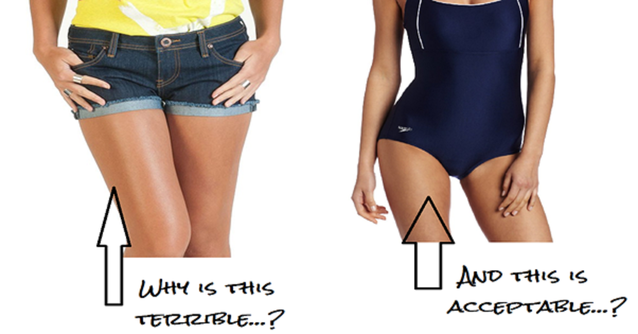 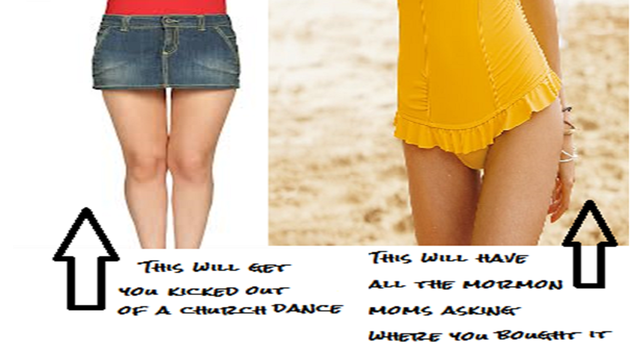 How can I choose a modest swimming suit?

The Church encourages modesty in dress for ﻿all occasions, including swimming﻿. The dilemma comes when people want pictures or measurements or definitions of exactly what is OK to wear. Since fashions change from place to place and time to time, this is not possible.

﻿In sports, recreation, and all aspects of our lives, we need to practice the principle of modesty.﻿

“Modesty is a gospel principle that applies to people of all cultures and ages. In fact, modesty is fundamental to being worthy of the Spirit. …

“… When we recognize our bodies as the gifts they are and when we understand the missions they help us fulfill, we protect and honor them by how we act and dress.

“In everyday living, immodest clothing such as ﻿short shorts, miniskirts, tight clothing, shirts that do not cover the stomach, and other revealing attire﻿ are not appropriate” (Robert D. Hales, “Modesty: Reverence for the Lord,” Ensign, Aug. 2008, 34–35).

Concerning modesty, it is best when we no longer ask, “How far can I go?” but rather, “How well can I follow gospel standards?”

As we said above, the doctrine is clear, so why is it that so many Mormon mothers make their daughters throw away their short shorts and skirts, sleeveless/backless shirts, but allow them to wear a combination of all of the above? Most are also currently wearing the same thing themselves! Setting terrible examples in the process! So it got us asking the question; why do they do it? Is it because there just is nothing available? They can’t find any suitable replacements? So we decided to look some swimsuits up ourselves and Ashley found this in less than 10 minutes: 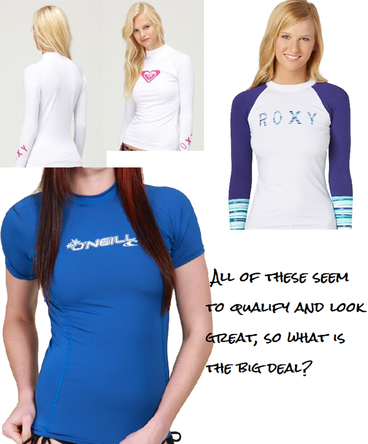 www.tactics.com as well as www.swimoutlet.com had hundreds of styles that were all modest and would fulfill the command to be modest while all being reasonably priced; so what is the big deal? For us it is a no brainer, we just never put two and two together! In the piece we took from the New Era article it mentioned that two pieces now are some of the most modest swimsuits around, these must be the ones they were talking about; with bottom shorts to match. (Shorts that are every bit as modest as any other pair of shorts you would put on your daughter and send her to school in!)

This brings us to our next big dilemma, what about the boys!? In the For Strength of Youth pamphlet it mentions that everything that applies to girls applies to guys, which stated that they were not to wear shirts that “do not cover their stomachs”, they also including this statement: “Young men should also maintain modesty in their appearance.”  Also throughout church literature the leaders of the church have issued the warning that the use of “﻿muscle shirts﻿” or “﻿sleeveless shirts﻿” is immodest for men. So we are not allowed to wear shirts that have no sleeves (muscle shirts) and can’t wear shirts that don’t cover our stomachs… WAIT! I HAVE AN IDEA! Let’s just not WEAR a shirt! So we ask: 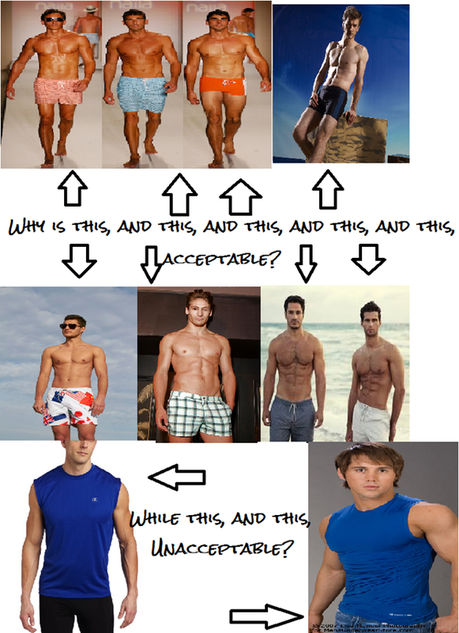 The rules are no different; the modesty and garments are identical for both men and women- so why is it that men don’t have to wear a shirt while swimming and women do? This is completely wrong, the same rules do apply. Men need to be wearing: 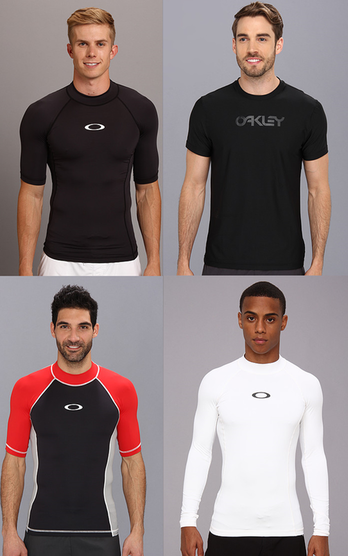 Or they are living a double standard and not being modest. Remember that if you want your children to be modest they needn’t look any further than their parents; be an example of the believer in deed and join Ashley and I as we take this temple recommend question seriously and live modestly.  Crazy to think that these used to be the rebels:

Don’t let your morals slip, return to the modest past of self-decency!

© Ashley and Micah English and The II, 2019. Unauthorized use and/or duplication of this material without express and written permission from this site’s author and/or owner is strictly prohibited. Excerpts and links may be used, provided that full and clear credit is given to Ssenkrad_II and The II with appropriate and specific direction to the original content.